Check out the Tech Laureate Awards: Innovators from all over the World using technology to make the World safer and healthier, more prosperous and just. Check these out. Imagine how different things could be if these innovations were replicated wherever they could have a positive impact.

The keynote speaker at the event last November 13th was Muhammad Yunus ,

winner of the 2006 Nobel Peace Prize, developer of the Grameen Bank, and all around amazing human being. Check out the webcast of Muhammad Yunus's powerful keynote talk "Social Business, Science, and Technology as Forces for Justice and Prosperity", and the interview with Geoffrey C. Bowker, Executive Director, Regis and Dianne McKenna Professor, Center for Science, Technology and Society, Santa Clara University.
Posted by Bego at 1/30/2009 02:19:00 AM No comments:

Zann Gill's new book, "What Daedalus told Darwin, Darwin's dilemma & designing intelligence" is expected to hit the bookstands in 2009. She lucidly explains the essential balance between competition and collaboration, which is not only theoretically fascinating but has huge practical implications. This important work addresses our very survival on the planet. Zann Gill's thesis, which shows the link between how evolution plays out and future sustainability, supports the mission of Chemists Without Borders to network local anti-pollution initiatives toward global sustainability. Here she gives a great video preview of the book:

I once asked the late David Faison what would the poet be if he lived today? "A rock star!" he replied. Few realize how much Burns's sayings and quotations are part of daily use in the English language. Steinbeck's book Of Mice And Men takes its title from Burns's great poem, To a Mouse (where the emphasis is on the "and", by the way). Burns's Auld Lang Syne is sung throughout the world the moment each new year is rung in, but few have any idea what it means; it's what it does mean that has kept it in this unique position of highest honor for over 200 years (more of which, on another occasion). People around the world on this night celebrate Burns's birth with a Burns Supper, a great festive occasion where poems are read, whisky is drunk (and often so are the drinkers), and haggis is eaten. There may well be a celebration near you - perhaps next year . . .

Dr. Rolande Hodel has been selected to receive one of three American Chemical Society/Astellas USA Foundation awards for 2009. The Astellas USA Foundation Awards were established to identify individuals or teams who exemplify the criterion of having significantly contributed to scientific research that improved public health through their contributions in the chemical and related sciences. This award carries a $30,000 prize in addition to an invitation to participate in the awards presentation and symposium at the August 2009 ACS National Meeting in Washington, DC. You are invited to attend.

Rolande has also advanced to the semi-finalist of the Buckminster Fuller Architect Design contest for designing AIDSfreeAFRICA. The finalist will be announced in April and celebrated in May in Chicago. About the Buckminster Fuller Challenge: After decades of tracking world resources, innovations in science and technology, and human needs, Buckminster Fuller asserted that options exist to successfully surmount the crises of unprecedented scope and complexity facing all humanity – he issued an urgent call for a design science revolution to make the world work for all.

AIDSfreeAFRICA is grateful to be a part of this revolution. Your support is greatly appreciated.

A Remarkable Moment in History

While watching this momentous event, the first inauguration of an African-American, Senator Barack Obama, as President of the United States of America, I could not restrain my tears. I was reminded of a speech I read of Sir Winston Churchill's given on November 10, 1942, referring to the Battle of El Alamein between British and allied forces led by Generals Alexander and Montgomery on the one hand and German forces led by Field Marshall Rommel on the other. Churchill said, "We have a victory - a remarkable and definite victory." This was a turning point in the Second World War.

In the same speech, however, Churchill cautions, "Now this is not the end. It is not even the beginning of the end. But it is, perhaps, the end of the beginning." On the same day as the inauguration, I received an email message regarding a young man from the Equality Coalition in North Carolina whose life has been threatened by American racists for speaking out against racism. The end of the beginning, perhaps, but much, indeed, remains to be done. 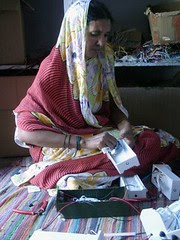 The following is from the excellent PBS NewsHour with Jim Lehrer and his team. Imagine the opportunities, not just for solar power as in Bunker Roy's school, but for Tech Laureate D. Vidya Sagar's stoves that protect rural people from indoor smoke and the external environment from the same smoke, the manufacture and maintenance of Grainger Prize winner Prof. Abul Hussam's SONO filter for removing arsenic from drinking water, etc. Replicate, replicate, replicate!

By the way, Bunker Roy points out that men generally speaking, need not apply because they are typically unteachable!

"The Barefoot College in northern India teaches women skills to bring solar power to their villages and to manage the energy system in rural areas. Fred de Sam Lazaro reports on the philosophy behind the school and its unusual approach to empowering women."

"The Barefoot College" in northern India

Seeking Novel Protein Design to Help Solve the Neutralizing Antibody Problem. "Solvers who deliver the most innovative solutions receive financial awards ranging up to US$1,000,000."
Posted by Bego at 1/14/2009 12:01:00 AM 3 comments:

According to C&EN (Jan. 5, 2009, p.13), "The acetate fiber is used to manufacture cigarette filters, a market with significant growth in Asia." Shame on Eastman Chemical for promoting, expanding and profiting from the increasing ill-health of people around the world. It is the least educated and already least healthy who will likely suffer most from Eastman's largesse.

It is hard to imagine that the company's founder, the amazing George Eastman, would support such an enterprise. From the Kodak web site: "Eastman was a stupendous factor in the education of the modern world," said an editorial in the New York Times following his death. "Of what he got in return for his great gifts to the human race he gave generously for their good; fostering music, endowing learning, supporting science in its researches and teaching, seeking to promote health and lessen human ills, helping the lowliest in their struggle toward the light, making his own city a center of the arts and glorifying his own country in the eyes of the world."
Posted by Bego at 1/13/2009 02:49:00 PM 3 comments:

Bioline International is a not-for-profit scholarly publishing cooperative committed to providing open access to quality research journals published in developing countries. Bioline International is currently seeking library memberships to sustain this key service, at a very affordable rate of $500 per year per library. This is much lower than the average cost to subscribe to just one scholarly journal.

Support for local publishing in developing countries means a venue where local scholars can focus on local issues, not likely to be high priority for publication in journals in the developed world, such as articles on malaria, river blindness, food handling.

For more on Bioline International, see my post on The Imaginary Journal of Poetic Economics. I know some of the people involved, coordinators and publishers, am familiar with their work, and highly recommend supporting this initiative.
Posted by Heather Morrison at 1/10/2009 04:58:00 PM No comments:

So what's in a Unique Selling Proposition?

While I have my own ideas, I'd like input from readers on what you think Chemists Without Borders' unique selling proposition is or should be. The Economist magazine has countless renowned institutions listing courses and opportunities, but this one from the struck me as a perfect exemplar:
UNIVERSITY OF OXFORD:
EDUCATING LEADERS FOR 800 YEARS
Posted by Bego at 1/07/2009 01:48:00 AM 2 comments:

A new interview with Sarah Chayes

Coriolis effect: n. a hypothetical force used to explain rotating systems, such that the movement of air or water over the surface of the rotating earth is directed clockwise in the northern hemisphere and anticlockwise in the southern hemisphere. [G. G. Coriolis, French scientist, d. 1843] [source: Wordfinder, Sara Tulloch, ed., Clarendon Press, Oxford, 1993]

Coriolanus effect: n. the act of going around in ever decreasing circles until one vanishes up one's own backside. [Glaswegian expression]

There's a great example of the Coriolanus effect in this article in The Economist magazine regarding Protectionism:

The battle of Smoot-Hawley (Dec 18th 2008, from The Economist print edition) A cautionary tale about how a protectionist measure opposed by all right-thinking people was passed 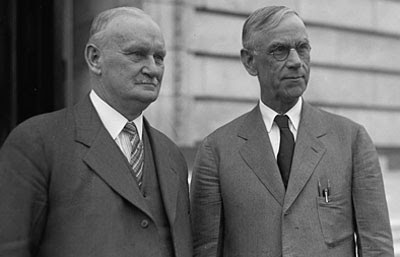 Hawley and Smoot, the bogeymen of trade

The article depicts what happened to world trade between 1929-33 as trade tariffs were being manipulated, the Coriolanus effect in action:

Please click the Donate button above, or make check out to: Chemists Without Borders, Inc.