We're raising money to purchase laboratory supplies, reagents, etc., for a series of micro-column tests in the lab that will determine the capacity of locally generated biochar for removal of toxic pesticides and pharmaceutical residues from drinking water sources.

Check out our project website, and please consider supporting this work - thanks!

Winter is coming, or is it always cold in Russia? 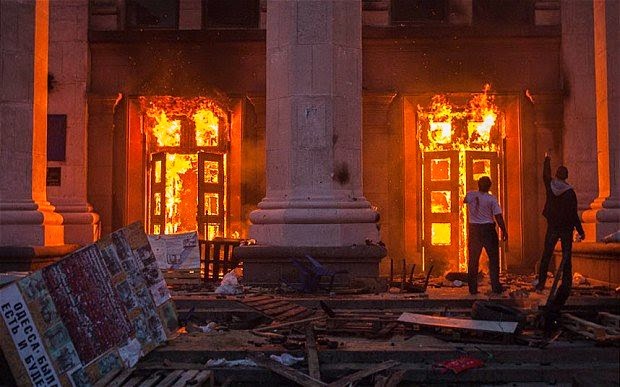 In the midst of the Ukrainian crisis, tactics reminiscent of the Cold War began emerging—ones that trace back to the KGB laboratories half a century ago. From guns that spray hydrogen cyanide to assassination attempts with “Agent Orange,” it seems that the use of chemicals as weapons (not to be confused with chemical weapons) is still on the Soviet agenda. On May 2nd 32 people died due to a fire in the trade unions building in Odessa, which were occupied by pro-Russian protesters. The Russian Foreign Minister Sergei Lavrov expressed outrage and immediately accused Ukrainian authorities for responsibility of this scandal: however, as investigations progressed, a well-known agent came into the picture—chloroform. Large traces of chloroform were found in the ashes of the building coupled with open exits, unscathed parts of the building and positions of the bodies that did not show signs of escape or struggle puzzled authorities.

But why chloroform? Chloroform (CHCl­3) is easily synthesized and dangerous depending on levels of exposure. It is a colorless liquid with a pleasant scent, and sweet taste (one of the discoverers that chemist Samuel Guthrie enjoyed was its “cherry like taste”) and occasionally took shots of the liquid. Chloroform can be easily synthesized by combining two common household items – bleach and acetone. In an exothermic reaction the two will form a heavy liquid where a simple decanting will yield a substantial amount of chloroform. Before chloroform was known to cause kidney and liver damage, it was used as an anesthetic, administered by breathing in more than 10000ppm of air. On its own chloroform is not a significant threat, but using it to incapacitate people in this situation is deadly.

Ukraine has asked Israel to help in the investigation: thus far, authorities from both sides of the crisis have been detained and further chemical analyses will reveal the truth. However, all eyes are on Russia with suspicion: more on the story to follow as the investigation furthers.

Chemists Without Borders - Bego Gerber, our  Chairman and Co-Founder, is presenting our ongoing humanitarian work on Sunday afternoon August 10th and Steve Chambreau, our Co-Founder, President and Director, is also presenting at 8am on August 12th.   Come and join us for simulating presentations and further discussions. More details will follow…
Posted by Lou at 6/10/2014 05:04:00 PM No comments: