University of Massachusetts has just published an excellent article on their project with Chemists Without Borders on a low cost process they are developing to measure the concentration of arsenic in rice. When the process is fully developed, it will be transferred to a lab at the Asian University for Women in Chittagong, Bangladesh, and Chemists Without Borders Bangladesh Team will promote the service to rice producers, dealers and consumers in Bangladesh.

Email ThisBlogThis!Share to TwitterShare to FacebookShare to Pinterest
Labels: arsenic in rice

With all due respect, I got the impression from this piece on tonight's PBS NewsHour (just a few minutes of your time to watch, please) https://youtu.be/a3oL3WjLLA4?t=5m46s, that much more has been promised and could be done to support these refugees than we are currently doing. It was suggested that we are distracted by military and political issues. If am not misinformed, Mr President, shame on us. Since when did the greatest country in the world lack enough resources to master all three effectively, military, political AND humanitarian? I know you share my deep concern about all these refugees. Please address their plight with even greater urgency. Food, water, medicine, at least. Thank you.

With the highest respect,

Chemists Without Borders Receives Award from the American Chemical Society

Congratulations to Chemists Without Borders for receiving an American Chemical Society P3 Award! The purpose of the Partners for Progress and Prosperity (P3) Award is to encourage and recognize successful and exemplary partnerships. These partnerships must result in impactful outcomes that improve the public perception and appreciation for chemistry, promote career advancement opportunities, support entrepreneurship in the chemistry enterprise, advance advocacy efforts with government and thought leaders, or support STEM (science, technology, engineering, and mathematics) education or research. Chemists Without Borders is being recognized for its humanitarian work in improving water quality and science education in South Asia and Africa. We are grateful to all our volunteers, past and present, and the ACS for their support and partnership! We accepted the P3 award at the Central Regional ACS meeting in Covington, Kentucky.
Posted by Unknown at 5/25/2016 07:23:00 PM No comments:

As I sat in the comfort of my warm bed last night, the sound of the rain pelting against my bedroom window put a smile on my face. Then I thought of those refugees who are none so fortunate. On top of what they have already lost and endured, they don't even have tents to protect them from the elements. They are, as it were, just outside my bedroom window ("with their faces pressed against the window of our affluence," as Sen. Edward Kennedy once so eloquently said) huddled in the mud and rain, men, women and children, the infant and the elderly. It's simply not good enough. What then must we do? 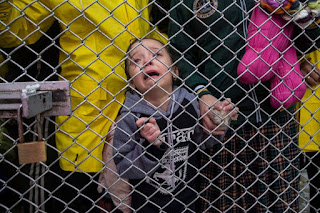 "The ILO [International Labor Organization] estimates that there are up to 20 million people employed in the global chemical, pharmaceutical and rubber and tyre [sic] industries today." We are a huge pool of people, many of whom are not chemists but who are all connected with one another with probably six or fewer degrees of separation. I think it’s fair to say, too, that each of us has at least 10 people in our personal circle who are unique to us. That’s 200 million educated people worldwide! Imagine what can be accomplished even if only one thousandth of us were active. The question remains, “How do we mobilize that larger community?” What are your ideas that will help these suffering people sooner rather than later?

Here's an interesting piece by Cheryl Hogue of C&EN about a study by the Environmental Protection Agency. The study finds that "many industrial facilities aren't acting to prevent the release of toxic chemicals because they aren't aware of less hazardous alternatives."

How could this happen?  How, in the 21st century, in a country that is modern, educated, and relatively wealthy, could such an atrocity occur?  How could anyone forget how important clean water is to the health of people, especially children.  How could this have gone on so long before action was taken to warn residents of Flint, MI?  How could the local government be aware of this and not do something for so long?  We often think of clean water issues as a 3rd world problem, due to a lack of education, resources, or money.  Yet here we are…


This CNN article sites a Genesee County Board of Commissioners October public health emergency declaration as saying that the water from the Flint water plant met all federal standards.  The lead was said to be leaching from service lines or solder connections due to the corrosivity of the Flint River water.


According to this article, Michigan officials ignored EPA warnings.  Previous lead poisoning incidents like that in Washington DC in 2004 were mentioned as well, so this isn’t the first time something like this has happened.


There have also been questions raised in this article about the sampling practices used across the US for testing water and how it may result in artificially low lead readings.


If nothing else, maybe this crisis will make people more vigilant about making sure everyone has access to clean drinking water.  It is something that we in the US have come to expect, but it is too important to take for granted.
Posted by Unknown at 2/04/2016 05:24:00 PM No comments: