A Whole World of Concrete

Straight from the press:

AUBURN, Maine (AP) — Termites wouldn't like the house that Mike Mercier has built.

Mercier built his house out of concrete — 85 yards of it. From the outside, the new 2,300-square-foot ranch-style home doesn't look a lot different from most. The basement and foot-thick exterior walls are made of concrete — but so are the floors, windowsills, countertops and end tables.

Mercier and his wife are often asked if their bed is concrete. It is not.

Mercier, who has run a concrete contracting business for three decades, said he got the idea of building a concrete house from an exhibit he visited at a World of Concrete convention.

Construction involved no wood framing or plywood, just windows, siding and interior Sheetrock. Hollow foam blocks were stacked and angled inside the walls before concrete was pumped around it. Even some of the furniture inside is molded concrete.

"The end tables are so cute," said Sue Mercier.

The walls are so soundproof that the Merciers' dog has a hard time hearing people come up the driveway now.

Such a home is energy efficient, because foam and concrete homes use less oil to heat, Mercier said. But a concrete home costs 10-15 percent more to build than a traditional wood-frame home, he added.

I don't know about cute endtables, but I have a friend who is an architect who has said this is a very good idea. I would be interested to hear any feedback in the comments.

Here are Bego's notes from the most recent conference call: 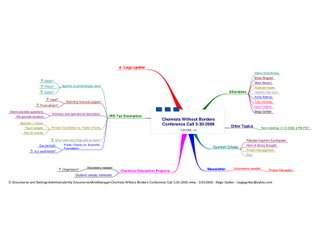 I will add my notes when I have a minute.