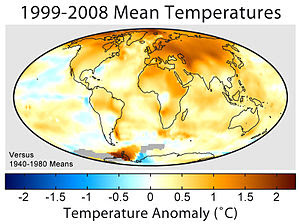 The NRC issued a report on July 16, 2010, entitled, "Near-Term Emissions Choices Could Lock in Climate Changes for Centuries to Millenia: Report Estimates Impacts from Various Levels of Warming." These data will inform policy decision-makers. Here are some of the main points, quoted directly:

Although some important future effects of climate change are difficult to quantify, there is now increased confidence in how global warming of various levels would relate to several key impacts, says the report. It lists some of these impacts per degree Celsius (or per 1.8 degrees Fahrenheit) of global warming, for example (these apply for 1 C to 4 C of warming):

What then must we do?

Rotavirus is a diarrheal disease that kills half a million children worldwide every year. Current vaccines do not reach all the children early enough. This new vaccine, which has taken decades of effort to develop, would allow administration at birth and ensure more babies be protected. This map from a CDC page, shows the estimated global distribution of the 800,000 annual deaths caused by rotavirus diarrhea. Read more about this important advance by clicking the title.